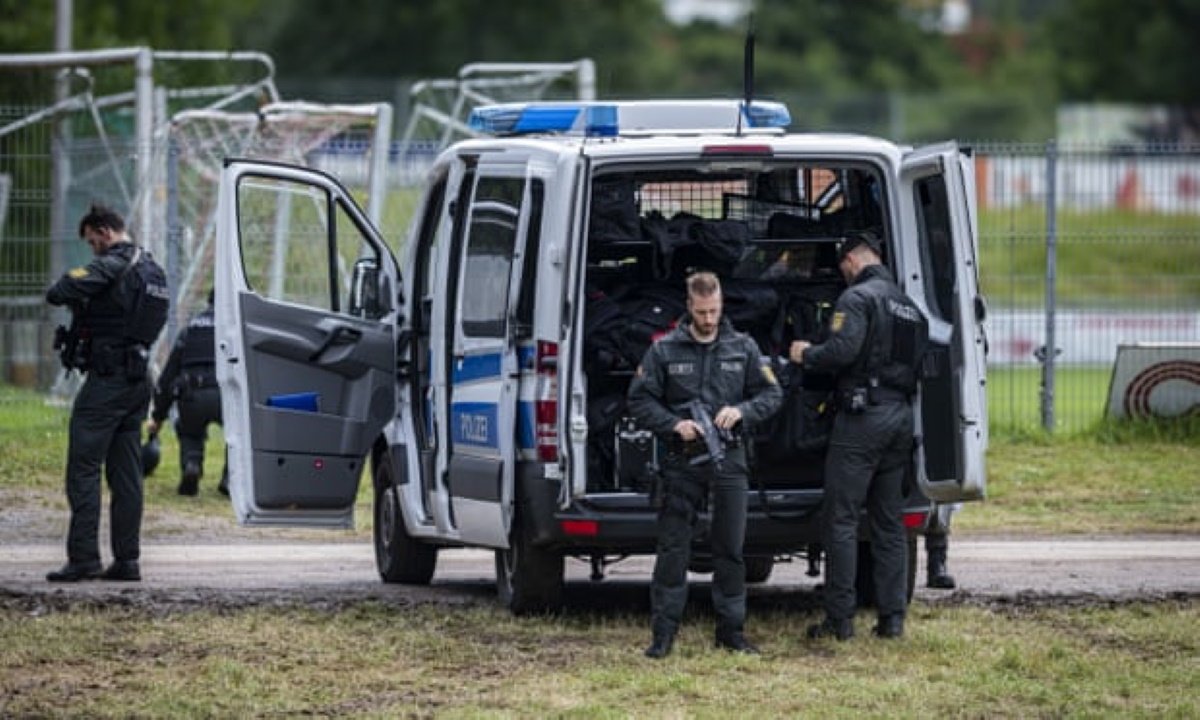 The man, named by police as Yves Rausch, had been on the run since last Sunday morning after holding up four officers and stealing their firearms in what his mother claims was a moment of “panic”.

After a tip-off from two witnesses, Rausch, 31, was found sitting in a bush “with four guns visible in front of him”, said Juergen Rieger, the head of the search operation.

The suspect also had an axe in his lap and one further gun, and there was a letter in front of him, Rieger said. Rausch was slightly injured in the arrest, as was a member of the special forces, who was cut with the axe.

“I am relieved, happy and grateful that this exceptional situation for our town has come to an end,” Uwe Gaiser, the mayor of the village of Oppenau, told reporters.

The drama began on Sunday, when police were called to a forest hut on the outskirts of Oppenau in Baden-Württemberg after sightings of a “suspicious” figure in combat gear carrying a bow and arrows, but were caught off guard when the man pulled a gun on them.

A 200-strong police unit had spent the previous five days combing the forest, using helicopters, thermal detectors and sniffer dogs to scope out derelict buildings, caves and old bunkers, but to no avail.

Rausch, who is registered as having no fixed abode, is believed to have been living outdoors for some time. “We assume that the 31-year-old moves confidently through the rough terrain around Oppenau and knows the area very well,” police said.

Whether Rausch had a political motive or decided to run from police on the spur of the moment remains unclear.

A two-page text calling for a “harmonious life in and within nature” that Rausch reportedly left behind at a local restaurant has been described in some German media as his “manifesto”.

The newspaper Bild said the contents of the text bore a close resemblance to the 35,000-word neo-Luddite essay Industrial Society and Its Future by Theodore Kaczynski, better known as the Unabomber, who tried to spark a revolution in the US with a nationwide bombing campaign between 1978 and 1995.

However, police said on Friday they did not believe Rausch to be the author of the text left behind at the restaurant.

According to Der Spiegel magazine, Rausch was convicted of “incitement of the people” as a 15-year-old after doctoring a sign on a building to read “Jews away”. In 2010, he was sentenced to three and a half years in prison for grievous bodily harm after shooting an acquaintance with a crossbow.

Speaking to local German media, friends and family say the 2010 incident was a tragic accident and that Rausch, who trained as a carpenter in prison, does not pose a threat to the local population.

In an interview with Mittelbadische Presse, his mother said he had “experienced terrible things” during his time in prison and that pulling a gun on police officers must have been “last-minute panic” sparked by fear of returning.

Speaking to the local radio station BigFM, a friend identified only as “Sebastian” said Rausch was “a lovely, nice guy, polite and accommodating”, adding: “He does not want to go back behind bars. He’s scared that they arrest him again and that’s why he would have reacted this way.”

According to his mother, Rausch used the forest hut where the confrontation with police took place as his home, growing vegetables and carving wooden gnomes that he hoped to sell.