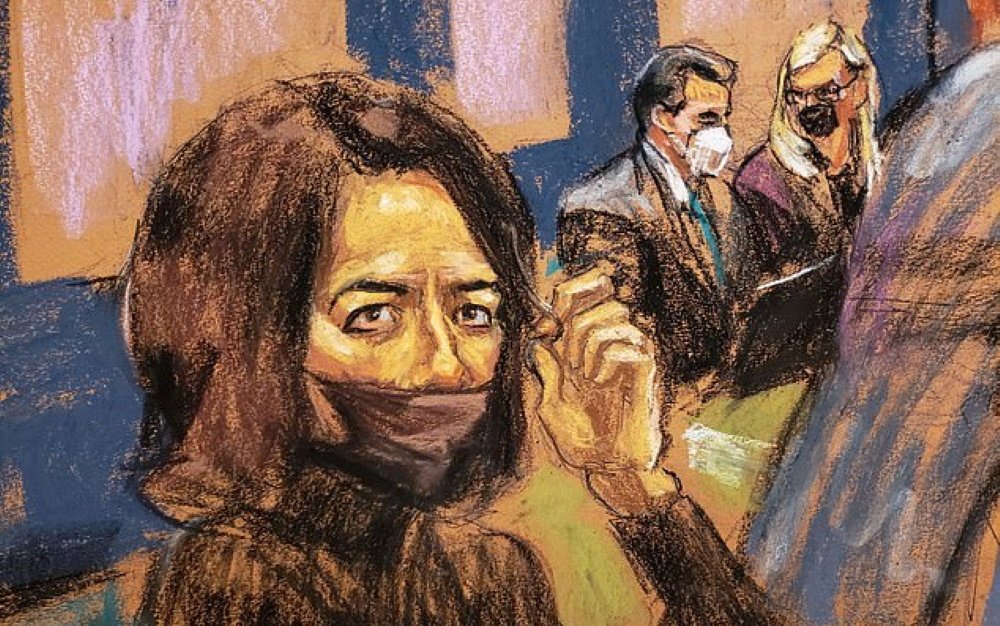 Jurors in the Ghislaine Maxwell case did not reach a verdict after their second day of deliberation – but they appeared to be zeroing on two accusers.

The jury of six men and six women deliberated for the whole day and sent four notes to the judge including one which related to Annie Farmer. They wanted to know if they could use her testimony for two counts of conspiracy to entice and transport an underage girl to engage in sex acts. Judge Alison Nathan said she would tell them that they could.

Earlier the jury asked to see notes of an FBI interview that Carolyn gave in 2007, the first time she spoke to law enforcement about being abused by Epstein. Judge Nathan said that it had not been entered into evidence so they could not see it. However, the jury could refer to its mention in Carolyn’s cross examination by the defense.

The jury deliberated for eight hours on Tuesday, bringing their total deliberation time to eight hours and 41 minutes. Judge Nathan told the jury that they could deliberate on Thursday if they have not reached a verdict by the end of Wednesday

At 10.10am after just over an hour of deliberating on Tuesday the jury sent their first note. Judge Alison Nathan said the jury were asking for the transcripts of testimony from Jane, Annie and Carolyn – but did not mention Kate. Kate is the only accuser whose claims should not be considered crimes as charged in the indictment.

Prosecutor Maurene Comey said that both sides needed to agree to some redactions before giving the transcripts over. Defense lawyer Bobbi Sternheim agreed.

The jury were not brought out and Judge Nathan said she would give them the transcripts in the deliberation room. Maxwell walked into court wearing a black turtleneck sweat and black pants while holding a green folder. She hugged her lawyers and waved at a young woman in the public gallery.

Maxwell’s defense delivered closing arguments Monday afternoon, telling the jury that she is ‘an innocent woman wrongfully accused of crimes she did not commit.’

In her closing remarks, Maxwell’s lawyer Laura Menninger said: ‘The government has failed to prove any charge beyond a reasonable doubt and the only correct verdict in this case is not guilty on each count.’

The defense again attempted to discredit the accounts of the four accusers, as Menninger stated, ‘The evidence has established what we told you it would, that the stories relied on by the government are erroneous memories, manipulation and money. But in this case the order is reversed. The money brought the accusers to the FBI where their personal injury lawyers sat right there.’

As for how Maxwell was portrayed, Menninger said that she had been made to look like ‘Cruella de Vil and the Devil Wears Prada all wrapped up into one’. Such a portrait was ‘as old as Hollywood’, Menninger said.

Menninger said that the prosecution spent a lot of time talking about Epstein’s lifestyle, about his wealth and his property and his private planes ‘just like a sensationalist tabloid would’.

Menninger said that Epstein was a ‘master manipulator’ who ‘abused his money and his power’. She said: ‘We are not here to defend Jeffrey Epstein, he is not my client’, but she added: ‘Ghislaine Maxwell is not Jeffrey Epstein’.

Menninger claimed that when Epstein died the prosecution ‘pivoted’ to going after Maxwell. The idea was that ‘Ghislaine was there, she must have known.’ Menninger criticized prosecutors for showing the jury dozens of photos out of 38,000 seized from Epstein’s New York home in 2019.

She said: Where are the other 31,960 photos? Who was in those photos? Was it other girlfriends? Other women?

Nor should the jury draw any inference from Epstein keeping photos of Maxwell. Menninger asked the jury that if an ex boyfriend or girlfriend had photos of them, would that make them a ‘sex offender’? Menninger condemned the use of such images as ‘straight up sensationalism.’

Turning to the accusers’ memories, Menninger said that they ‘inserted Ghislaine Maxwell into their narrative’ after they ‘lawyered up’. Menninger said: ‘You don’t need a lawyer to talk to the FBI’.

Menninger said that it fell to the defense to ask the ‘tough questions’ of the accusers and cross examination had shown that the ‘truth was manipulated and changed over time’ for the purpose of the victims getting a payday.

Menninger went through inconsistencies in the statements by Jane and Carolyn and said that they had suffered from ‘post event suggestion’, as their ‘false memory’ expert Elizabeth Loftus had described it – adding new and false information after the event.

According to Menninger, the prosecution had ‘broken promises’ to produce numerous house staff, family members and other witnesses to back up the claims. The idea put forward by prosecutors Maxwell became a ‘facilitator of sexual abuse’ for Epstein to maintain her wealthy ‘lifestyle’ was wrong.

Menninger said that Maxwell at the time was a ‘beautiful woman in her 30s’ who was just starting out on her career. Epstein was ‘manipulating everyone around him’ and ‘dating women behind her (Maxwell’s) back’.

Menninger said that ‘maybe it was Jeffrey who needed Ghislaine and her connections’, rather than her needing him for his money. Turning to each accuser, Menninger said that Jane was like an ‘actress who forgot her lines’ – Jane is an actress on a soap opera.

The charges against Ghislaine Maxwell

Count One: Conspiracy to entice a minor to travel to engage in illegal sex acts

Count Two: Enticing a minor to travel to engage in illegal sex acts

Count Three: Conspiracy to transport a minor with the intent to engage in criminal sexual activity,

Count Four: transporting a minor with the intent to engage in criminal sexual activity.

Just before the defense, the prosecution labeled Ghislaine Maxwell a ‘sophisticated predator’ in their closing arguments.

‘She was a sophisticated predator who knew exactly what she was doing,’ Assistant US Attorney Alison Moe told the jury Monday morning. ‘She ran the same play book again and again and again.’ ‘She was a grown woman who preyed on vulnerable kids,’ she added. ‘Maxwell was the key to the whole operation.’

Prosecutors reiterated the allegations made during the weeks-long trial that Maxwell acted as Jeffrey Epstein’s ‘right hand’ who caused ‘deep’ and ‘lasting harm’ to young girls. Moe said: ‘Again and again the evidence shows you how closely Maxwell was involved in Epstein’s so called massages.

‘She managed all the details right down to the lotions and oils. She was in on the whole thing’. Among the instructions in the household manual was the command to staff to ‘hear nothing, see nothing and say nothing.’

Moe said that the jury knew ‘exactly why’ Maxwell wanted such rules in place: ‘It’s because she was Epstein’s partner in crime. In that house behind closed doors Maxwell and Epstein were committing horrifying crimes’.

The second reason why the jury should find Maxwell guilty is that she ‘ran the same playbook’ with all of her victims, Moe said. She said that the similarities between the four accusers in the case were ‘incredibly powerful evidence of the defendant’s guilty’. Maxwell helped to select victims who were ‘vulnerable’ and struggling, Ms Moe said.

Jane was 14 years old and her father had just died. Annie was 16 and wanted to go to college. Kate was 17 and was ‘dazzled’ by Maxwell. Carolyn was living with an alcoholic mother and had been abused when she was four.

Maxwell and Epstein would invite them to his house in New York, his ranch in New Mexico or his home in Palm Beach to ‘isolate’ them. Moe said: ‘That was by design. It was Maxwell’s design. Maxwell was hanging out with these girls and isolating them and befriending them’.

Once the girls were alone Maxwell began to ‘normalize’ talk about sex and then sexual contact, Moe said, citing the massage that Maxwell gave to Annie Farmer. In fact Maxwell touched the breasts of three of the accusers, Moe said.

She told the jury: ‘They were kids in massage rooms on massage tables…it’s powerful evidence of the defendant’s guilt’ All the girls described interacting with the ‘same woman,’ Moe said. She said: ‘They knew her as charming, sophisticated….a woman who moved in social circles that were intimidating.

‘The relationships Maxwell cultivated with these girls were essential to the scheme….Maxwell helped established a close relationship that became the cover for sexual abuse.’