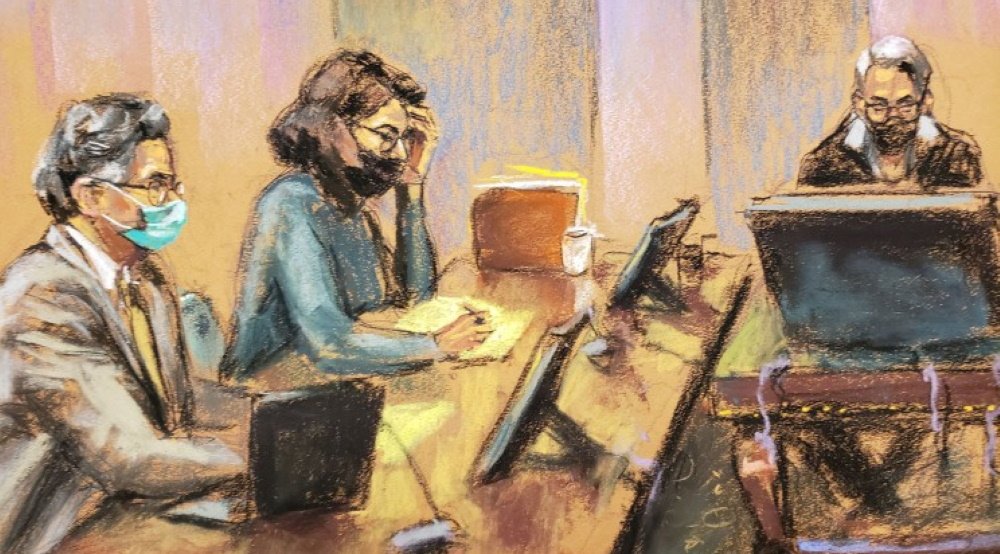 They and one other accuser also said Ms Maxwell touched their breasts. Showing photos of Epstein’s Palm Beach mansion, Ms Moe said: “Ladies and gentlemen, this was not a space for therapeutic massages.”

The prosecution showed the jury numerous intimate photos of Ms Maxwell and Epstein to paint a portrait of their “incredibly close” relationship. Among the images, which were not shown to the public gallery, were snaps of the couple naked in a pool and of Ms Maxwell massaging Epstein’s foot with her breasts.

“What you are looking at in these photos are two people in a sexual relationship,” Ms Moe, the AUSA, said. She said the couple made the environment feel “normal and casual” to young girls. “None of this was normal,” she added.

AUSA Moe noted that Epstein gave Ms Maxwell more than $30m over the years, and alleged the sums were payment for “terrible crimes”. The prosecutor described the couple’s alleged sex trafficking ring as a “pyramid scheme”: “One girl would bring another who would bring another.”

She said the scheme was laid bare in Epstein’s “little black book”, which made Ms Maxwell’s involvement crystal clear.

AUSA Moe concluded her closing argument for the prosecution by summarising each of the six counts facing Ms Maxwell, and which victim corresponds to each.

Referencing the defence’s contention that Ms Maxwell is being blamed for crimes committed by Epstein, Ms Moe said: “Let me be very clear: The evidence at this trial showed that Ghislaine Maxwell made her own choices.

“She’s a grown woman who knew exactly what she was doing.” She urged jurors: “Ladies and gentlemen, look at the big picture and use your common sense.”

Common sense, she said, shows jurors that the witnesses are not lying and Ms Maxwell is guilty.

Ms Maxwell’s attorney Laura Menninger began her closing for the defence by telling the jury: “I am not here to defend Jeffrey Epstein. He is not my client.

“The US presented evidence like a sensational tabloid. These were things that Epstein did, perhaps, his crimes. But Ghislaine Maxwell is not Epstein.”

Ms Menninger highlighted the “37,000 photos” not presented by the prosecution as she argued that the evidence had been tailored to paint Ms Maxwell in the worst possible light.

She also argued that witnesses called by the state had been “manipulated” into fitting a broader narrative.

Closing arguments in British socialite Ghislaine Maxwell’s sex trafficking trial took place on Monday morning as the jury was shown intimate photos of the defendant and Jeffrey Epstein, including images of them swimming naked in a pool.

In a powerful closing for the prosecution, Assistant US Attorney Alison Moe described Ms Maxwell as a “sophisticated” and “dangerous” predator who targeted vulnerable young girls.

“Maxwell ran the same playbook again and again. She groomed them. She caused deep and lasting harm to young girls. It is time to hold her accountable,” Ms Moe said.

In closing for the defence, Ms Maxwell’s attorney Laura Menninger sought to distance her from Epstein, saying: “The US presented evidence like a sensational tabloid. These were things that Epstein did, perhaps, his crimes. But Ghislaine Maxwell is not Epstein.”

Ms Maxwell, who has pleaded not guilty to six charges, refused to take the stand in her own defence last week, telling US District Judge Alison Nathan: “Your honour, the government has not proved its case beyond a reasonable doubt, and so there’s no reason for me to testify.”

The jury will be sent out for deliberation following Monday’s closing arguments.

Jurors began deliberating Monday whether Ghislaine Maxwell did in fact serve as Jeffrey Epstein’s partner in crime by recruiting and grooming young girls for him to sexually abuse.

The 12-person panel will review more than two weeks of testimony as they weigh six counts against the former British socialite, including sex trafficking of a minor and sex trafficking conspiracy.