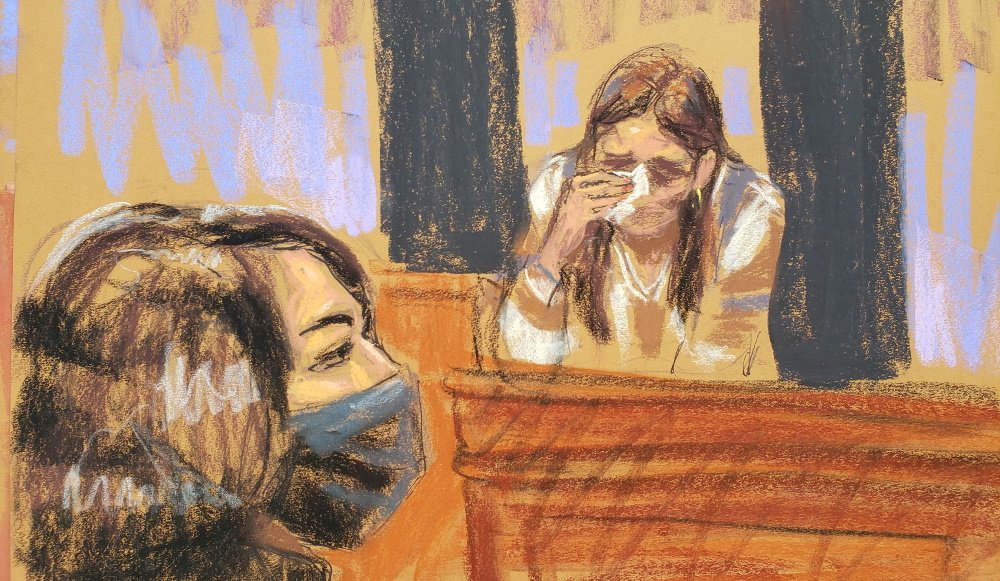 The third of four accusers took the stand late Tuesday morning in Ghislaine Maxwell’s trial. She began her testimony by briefly recounting a difficult childhood where she dropped out of middle school and became addicted to cocaine and pain pills.

Carolyn testified that she met Jeffrey Epstein through a female friend when she was 14 years old. That friend, Virginia Roberts, asked her if she wanted to make money by giving massages to her friend who lived on Palm Beach Island.

When the two girls arrived at Mr. Epstein’s house, Ms. Maxwell met them at the door and told them to go upstairs to Mr. Epstein’s bathroom. The first time, Ms. Roberts got fully undressed and Carolyn asked to keep on her bra and underwear.

Then, Mr. Epstein entered the massage room and lay down.

Forty-five minutes later, Mr. Epstein turned over, Ms. Roberts got on top of him and they had sex, Carolyn told the jury, her voice cracking. Carolyn watched from a nearby couch, she said.

Afterward, Carolyn said they were both paid, in hundred dollar bills left at the bathroom sink, and Ms. Maxwell took her number.

Carolyn testified that she gave Mr. Epstein hundreds of massages over the next four years. Ms. Maxwell, she said, would call to set up appointments, which her then-boyfriend would urge her to take.

She was paid $300 to $400 in hundred dollar bills after each encounter, sometimes handed directly to her by Ms. Maxwell, she said. She used the money, she said, to buy drugs.

She said she brought teenage friends over a few times to take part in the massages, and was paid extra.

Once, she said, Mr. Epstein pushed a button in the room and a young naked woman with an accent came into the room, and the three of them had sex.

Carolyn testified that Ms. Maxwell saw her naked in the massage room three times, including once when she touched her breasts and complimented her body.

Ms. Maxwell and Mr. Epstein knew she was only 14 years old, she said, because they asked if she could travel to Mr. Epstein’s island and she said she did not have a passport and her mother would not allow her to go.

She also told Ms. Comey that she regularly takes methadone and other medications to manage her addiction and schizophrenia symptoms.

Several years into the abuse, Carolyn got pregnant by her then-boyfriend and had a child, she told the jury. Afterward, she went back to Mr. Epstein’s house a few times, because she needed money. “He asked me if I had any younger friends, and I said no,” she said.

For the third time, defense lawyers for Ghislaine Maxwell sought to discredit a witness who described being sexually abused as a teenager by the disgraced financier Jeffrey Epstein, starting when she was 14.

The defense lawyer, Jeffrey S. Pagliuca, cited court depositions and F.B.I. reports created more than a decade ago to suggest Carolyn had given inconsistent accounts of her experiences.

At a point, Mr. Pagliuca asked about how massage sessions had been arranged. During her direct testimony, Carolyn said that Ms. Maxwell had often called her to arrange those visits. But Mr. Pagliuca suggested that Carolyn had looked up Mr. Epstein’s number and had placed calls to his residence.

“Isn’t it true,” he asked, “you got Epstein’s number from the phone book?” “The telephone book you’re talking about was my personal book,” Carolyn replied.

Mr. Pagliuca also asked about a document summarizing an interview in which Carolyn was asked whether she had ever had intercourse with Mr. Epstein and had replied no.

Before Mr. Pagliuca had finished asking his question, however, Carolyn interrupted him. “I replied ‘no’ because I was not a willing participant,” she said. “He had intercourse with me, and I stopped it.”

Prosecutors then asked her a few questions in rebuttal. She began weeping, saying she was only a young teenager when she met Mr. Epstein. She said she had appeared to testify because what Ms. Maxwell had done “was wrong.”